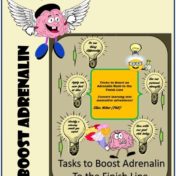 Students often complain that passive note-taking is both boring and a waste of time?  Have you heard it? Whenever I offer motivational materials to support their study sessions though, I notice students tend to get far finer results for their efforts and talents. They do better in quizzes, tests and… Read more »

Higher Education and Brain Based Benefits Ask the lecturer in this video and he will say he engages listeners.  He might even go on to suggest today’s audiences expect too much and give too little. Ask listeners and they may support these 100 reasons to run hard from lectures!… Read more »

Spot any gaps in your life, where  adventure leaks out like water trickles through a sieve? Your brain’s working memory leads you to spot faulty traditions at work, or to see speed bumps that slow down progress in your day. But there’s more to change than finding flaws. For instance, … Read more »

When entire systems such as finances, health care or higher education, break down, corrupt and confound intelligent people, it’s time to power up the brain and reboot ethical practices to simplify. How so? Let’s fact it – taxes today tax your brain! Beyond the clutter of financial policies, written to… Read more »

Spot any gap where you live or work, regardless of how small, and you may well be staring into the eyeballs of your own destiny.  How so? Even though I taught university classes and facilitated top leaders around the world for many years, it still surprises me how few people… Read more »

Well known savant, Daniel Tammet who easily recites 22,514 numbers in order, also reminds readers in Wide Sky,  that he struggled to do simple sums in math class. If that failure to fit math methods favored in school speaks to you, you likely find yourself among those of us who… Read more »