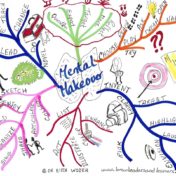 Want faster or slower brainwave speed? It depends on what we are trying to accomplish. For example, do we want to sleep or party? Are we willing to live with stress or shift to serotonin, a healthier hormone? As often the case, when it comes to brain wave health, mind… Read more »

Researchers suggest that social media can harm kids’ brains, and few would disagree. Either way, social networks such as Twitter are here to stay. My question is, what impact do online networks play in strengthening minds and leading innovation across differences? Increasingly, brain gurus such as Susan Greenfield weigh in… Read more »

How’d you sleep last night? Reasons for sleeplessness may differ yet strategies for successful sleep often bear remarkable similarities. Before you hire a sleep specialist though, why not try tactics that calm the brain and come without side effects of medicine. You’ll likely sleep better and enhance REM if you:… Read more »

Have you experienced mental power that bubbles over in circles where no brain is left behind? Interactive sessions where creativity trumps criticism, and diversity’s the handmaiden of dignity and innovative virtue? The jury is still out on why some people are  smarter. Most  agree though, that brilliant solutions tend to… Read more »

During my two years on Baffin Island, up near Greenland, while teaching for McGill University, I both slept more and ate more during dark months where we saw no sunlight at all. Likely your shifts from light to dark are less extreme, but nevertheless, the brain’s reactions to daytime darkness… Read more »

Dream of finer sleep? Read on… In a normal sleep cycle, EEGs show the brain slows down progressively over a thirty minute period. After that point, the brain shifts into a  trance-like sleep known as REM, or rapid eye movement state. Without enough deep sleep, or REM, people are prone… Read more »

Electrical activity in your brain is as central to your intelligence as electrical lights are to your home.  Researchers predict the brain is organized by a hierarchy of electrical waves that control how one neuron communicates to another neuron.  We’ve heard that external forces such as cell phone emissions, especially… Read more »

Electrical activity in your brain is as central to your intelligence as electrical lights are to your home.  Researchers predict the brain is organized by a hierarchy of electrical waves that control how one neuron communicates to another neuron.  We’ve heard that external forces such as cell phone emissions, especially… Read more »