Some say that men’s logic rivals women’s emotion, when it comes to leading change, problem-solving or coping with stress.

Others say that successful men and women use both logic and emotion – but they use it differently to lead change and cope with stress.

What do you say? 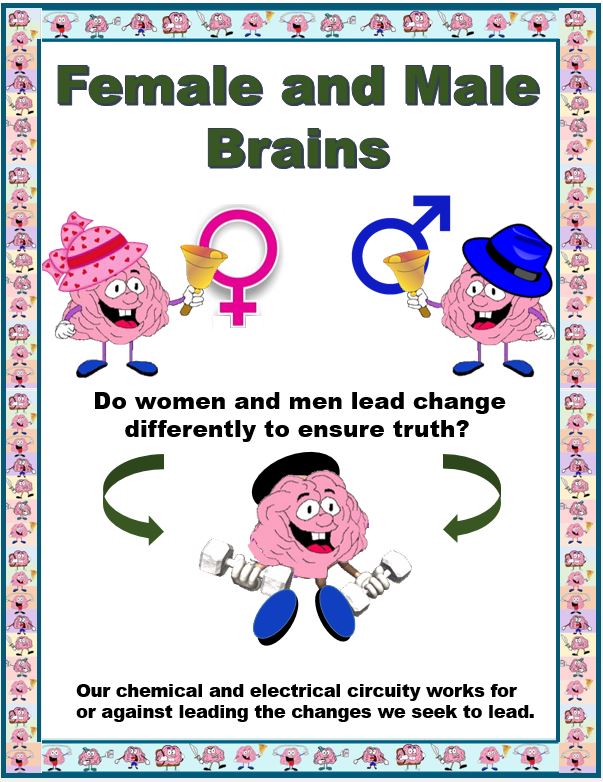 Interestingly,  hilarious mental differences you’ll spot in Mark Gungor’s “Tale of Two brains” YouTube below are based roughly in current research about men and women’s brainpower.

OK, I admit that science  stretched a bit here, in humor’s attempt to shift from jargon into juicy vernacular that hits home key points. In addition surveys were sent out by Esquire to many women for insights on their own gender and 1000  hilarious responses resulted.

On a more serious note though, we benefit more from strengths in both genders when we draw from distinct operations in each. How so? Did you know for instance, that while many boardrooms include men only – new research proves that teams with more women have higher IQ?

Women mix multiple intelligences together  to problem solve– men tend to focus more on one intelligence at a time. Why so? Gender brains differ in their corpus callosum structure. The corpus callosum, or thick layer of nerve cells, connects the right and left brain hemispheres.  It’s role is to transfer information back and forth across both sides of the brains. If you’ve ever wondered why men tend to zero in on one issue only to resolve problems – you’ve likely also notices that women engage multiple intelligences together to resolve issues.

Women retain a thick layer of corpus collosum – while men shed most of this brain cell layer at puberty.  That’s why their left and right hemisphere’s tend to work less in concert and more in a singular focus on one problem or issue at a time. Brain imaging shows that that even when men and women perform the same tasks equally well, they draw on different parts of the brain to do so.  Simply put women integrate their intelligences to solve problems, while men focus more on one intelligence at a time.

Even at rest, research shows that male and female brains differ both biologically and cognitively.  Perhaps more frustrating than trying to relate to differences in the brain at work, are the frequent dismissals of gender contributions from either side. See men’s and women’s brains as an advantage to both sides, and you begin to learn valuable new lessons about both.

Learning from Both Genders

Can you envision both genders creating and navigating far bigger pictures together?

Einstein said it best: Vision without execution is hallucination. You could also say: Execution without vision is shortsighted.Successful people craft insights with their emotional intelligence, and then add logical action plans for mind-bending results.  Have you seen winning visions generated and executed by mixed genders lately?

Students love to play the gender circle game to get started, and their exchanges tend to rock hot topics!  It’s fun to listen to the differences emerge during a fun game both genders enjoy! 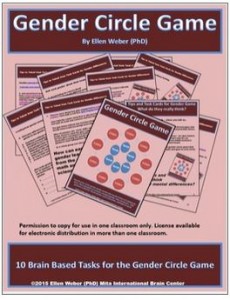 Here’s the skinny on what we know:

1. Men tend to be better at numbers and women tend to trump language and communication.

2. Men traditionally dominated fields of math, science, and engineering yet that imbalance is changing.

3. Women hold the lion’s share of higher education degrees since 1982, yet women do less well on standardized tests used for college entrance and graduate school requirements. The best universities are attracting more men to fill their enrollment gaps.

4. Hormones play a larger part in cognitive operations than once realized. Research, for example, shows that when people change their genders, their cognitive patterns also change.

5. Women often outperform men on tasks that use language processing, and draw on more symmetric activation across brain hemispheres.

6. Men often outperform women in tasks that call upon activation of the visual cortex areas.

7. Research shows, through brain imaging,  that even when men and women perform the same tasks equally well, they draw on different parts of the brain to do so.

In reality,  both genders use logic, which is one of  multiple intelligences people possess in varying degrees. However, men and women tend to apply and express logic differently. Have you seen it happen?

What did you learn today from the other gender?