The mind is capable of anything – because everything is in it, all the past as well as all the future. (Joseph Conrad, Heart of Darkness).

What Conrad fails to warn us here is that every past action sits stored in our brain ready to shape and control things we think and do next. By shape, I mean our past beliefs can limit our future behaviors. The brain’s storehouse or basal ganglia controls self-talk, for instance. In other words, it’s not easy to correct a common misunderstanding when we’re steeped in past notions of a thing.  Take introversion, as being portrayed as a negative or nerdy trait. How so? 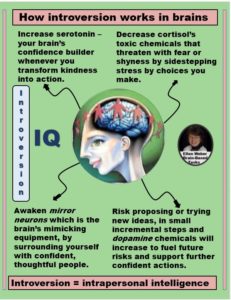 Based on what we’ve been told, we mistake introverts for anti-social, shy, fearful, or anxious loners who bounce on one foot, sweat or hyperventilate whenever they encounter people. Nothing could be farther from the truth. New facts about human brains dictate otherwise.

Introversion’s actually an expression of intrapersonal intelligence, or of our reflective selves. Furthermore, we all possess intrapersonal IQ in some measure. This intelligence operates our self-talk and it’s not just others who get our introversion wrong.

If highly reflective people cling to misunderstandings such as I love alone times because I lack basic skills to enjoy others, they can trigger depression or worse. Their inaccurate or negative self-talk begins to stall magical superpowers that spawn strengths during delightful alone times. Those deep mental reflections that Conrad referred to as mental capabilities.

Expose the inner secret truths of talented introverts such as the Dali Lama, for example, and you’ll find the opposite of anti-social behavior. So why do introverts often invite such misunderstanding? Simply stated, it takes new facts about the reflective brain to change our perception of introverts.

“He’s not interested in communicating with others,” his mother apologized. “Brett’s our introvert,” she said as if introversion defined Brett’s entire character.

We’ve all heard it. He’d rather be alone. Or, she rarely accepts party invitations, preferring to read at home alone. With all the bad press introverts attract, it’s time to come up with a new word that depicts the superpowers of this mental state.

Why not refer to introversion as intrapersonal intelligence? That’s what it is after all. It’s an inner sanctum of our brains, where we think, dream, meditate, take on moral convictions,  and hopefully enjoy personal growth daily. It’s a brilliant tool when we begin to see past its poor reputation.

What if we link introversion to valuable new opportunities to grow personal skills.  Rather than see “introversion” as limiting, what if we corral its dynamic mental strength? We’ll quickly conclude that intrapersonal IQ does not preclude growing social abilities since these two occupy completely different domains in your brain.  How so?Intrapersonal IQ is one of your multiple intelligences and it includes but it’s far more than ethics or common sense, or being kind to you!

Our human gene pools come hardwired with a unique mix of inner and ethical equipment, sometimes referred to as common sense. It’s also called intrapersonal intelligence, and it can be be taught, actively engaged, and tracked as we expand it.

Loneliness will be high if intrapersonal IQ is low, but loneliness is less about spending time alone and lore about low inner skills to enjoy personal growth. 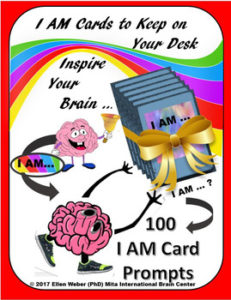 Daniel Goleman names common sense as part of one’s emotional intelligence. Others say it’s intuition, and Einstein claimed it won him the Nobel Prize. New research shows it includes hunches, where let’s say a soldier in battle makes a fast judgment call.  You may think of it as introspection where we grasp a clearer concept. Have you seen intrapersonal IQ active in thinkers you know?

As we cultivate a healthy intrapersonal IQ, we also capture superpowers from our alone time.