I could have become an opioid statistic.

My mother died of cancer at 38, which left me out on Barrington Street in Halifax, alone at 14. As mom deteriorated, so also did home life and hope.

My sister, two older brothers and I, slipped out the back door after dinner without a sound. We left behind dad’s angry taunts, demands to quit school to pay rent, clean his house, and prepare his meals.

Too afraid to speak or speculate where we’d be when darkness closed in, we trudged toward dusk. Bonnie’s words soon became our reality, “We need to separate…” After Tom disappeared, I slipped into a busy bus depot. With chicken-fried steak scents near the depot’s café, it reeked of stale whiskey near its long, wooden pews edged against metal lockers with graffiti not worth repeating.

Exhausted, I slumped onto a bench, closed my eyes and ignored a noisy family, crying toddler and whiney teen one bench over. I imagined the empty bed my sister and I’d shared the night before. I thought of Sister Ligouri, my favorite debate coach, and of my older siblings who talked about leaving school.

I awoke to see a guy with gaping holes in his jeans. He held out meth in a stained napkin and snapped, “How much you got?”

Without a penny or a plan, I feigned composure, nodded and started walking. “Where’re you goin’so fast?” I’m pretty sure I heard, “Bitch.” Walking faster, I listened but didn’t want to hear.  I pulled up my hood, breathed deeply, and panic pounded its heartbeats into my ears. Just as the sound of footsteps subsided I spotted the library and bolted to its familiar oversized doors.

Next morning, I walked to school, barely in time for debate practice. The topic? Do schools fail or succeed to help teens find mental tools for life. My pro team used Sister Ligouri’s biology class, a favorite, to solve tough problems and toss personal stories back and forth. 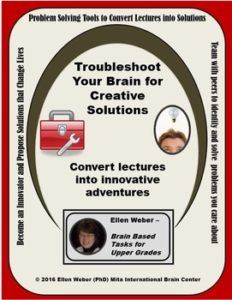 With a borrowed dollar from debate partner Pauline, I raced down the hall and devoured four doughnuts at the 12th graders’ sale table set up to fund their Toronto band trip. When I returned I overheard Pauline tell Ligouri, “Most days she skips two meals.”

By the time school ended that year I was 15, skinny as the white plastic skeleton that hung from a hat rack in science class, had gotten kicked out of my rooming house for late rent payments, and had accepted Sister Ligouri’s offer to clean at her convent in return for a room during the coming year. I hid my homelessness from the debate team, afraid I’d end up living in the orphanage attached to the convent where I cleaned and roomed, should anybody discover my parentless plight.

Sister Ligouri must have sensed that home fell apart after mom died, since my siblings dropped out of school. We avoided details, as I preferred privacy. By disappearing over holidays, and spending more time in the public library, I escaped explanations I still lacked.

Ligouri slipped me a scrunched up $20 bill as I left for the day. I bought a cheeseburger and a coke at the drug store counter, plugged Elvis’ Only the Lonely into the jute box and decided I’d become a brain researcher. 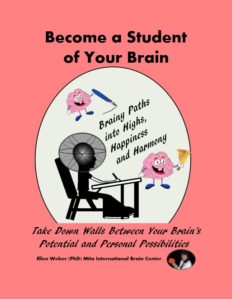 During preparation for our final debate I couldn’t get enough information about hope and new neural discoveries. It was as if it a surging interest in neural research intensified just to help my broken brain. We won that debate, and yet decades later I remain convinced that there’s no need to understand how inner chemicals called neurotransmitters release comfort in each synapse, in order to jostle around on clouds because they do. It’s enough to recognize Ligouri’s molecules of happiness, by switching on serotonin chemicals, until they turn our dials toward encouragement.

The negative team countered, “If natural drugs work so well, how come they’re not taught in school?” Luckily, Sister Ligouri’s biology class opened that week with the question, “Why do humans naturally possess about five to ten mg of serotonin chemicals?” She then challenged, “How do aha chemicals, 90% active in our guts, impact the 10% surging through our brains?”

Momentum built. Supports shot back and forth as if the moderator had left the room. We fought about failure to act so that neurons release serotonin. We questioned cravings.  We raised coping problems that arose when low serotonin levels ignite anxiety, fear, self-pity, stress, and depression.

I overshot reason with claims that serotonin transforms gunners into givers, lazy into learner, and victim into victor.

Ligouri interjected, “How do we become students of our brains?” I tossed back her own words which have since become my mantra,  “Grab a fresh gulp of oxygen and expect serotonin’s ecstasy.” 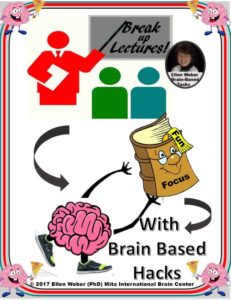 What if you help others to hack boring talks with engaging tasks that stoke curiosity for any topic?