Most agree that golf’s a cerebral game, so it makes sense to play with more brainpower in mind. Luckily we retain 90% more by teaching others as we learn ourselves, so it also makes sense for novice golfers to teach what they learn here to other wanna-be golfers. 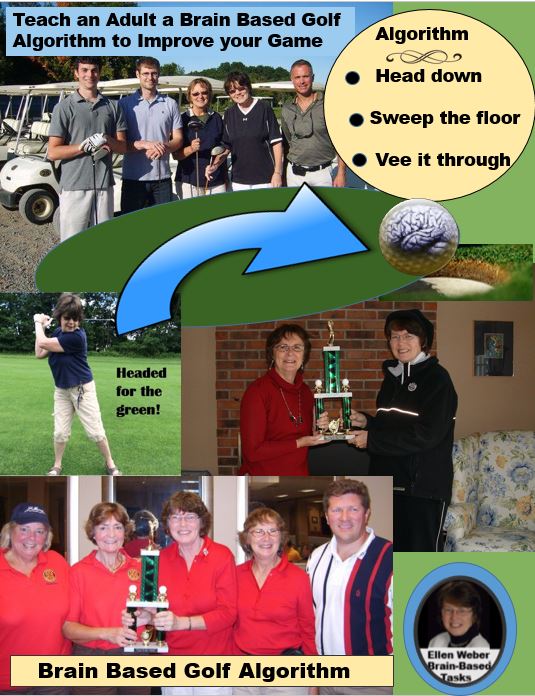 Lesser known is the fact that golf benefits us mentally, and that we can literally raise our golf IQ. We use a three point brain based algorithm, seen in the diagram below and explained in the following sections to …

1.Shoot for a higher target than you typically land. Need a birdie to remain under par? Then  shoot for an eagle. Your brain leaps to challenges and can create new synapses that stretch your swings to the next level. From that first shot off the tee, golfers capitalize on kinesthetic intelligence and naturalistic intelligence.  The game also adds brain chemicals for sharper focus. A growing body of research suggests how the links hold mental benefits for business brains, beyond what most golfers realize. Perhaps more even than rich alliances and friendships gained on the course, golf keeps players in top mental form.

2. Laugh lots and make light of missed shots. To keep serotonin high for the next good whack, use laughter as a fuel for a better ride on the next round. According to this YouTube video a new hazard – a fox – is now in full operation at Missoula, Montana Golf Course, near Clark Fork River Lodge. This fifteen pound red fox  is outwitting golfers at almost every hole and its fairways heists keep the most serious golfers in stitches.  It seems the little hoodwink fox is seen as a nuisance to a few poor sports yet laughed at by most golfers at the club, who take their shot and then take their chances against the 4-footed thief. What makes you laugh before you swing?

3. Conquer one hole at a time. Bank extra points for the tougher holes and with your deposit in place, relax to ward off stress before you swing for harder holes. Cortisol chemicals surge in a brain under pressure and will work against your golf skills. If you get better shots on the front nine, for instance, work harder for fewer strokes, and then treat the back nine as a learning curve. Challenges that often don’t exist in the first 9 holes tend to pop in the last 9 to give you practice shots from many angles, if you can snip the amygdala before you start the game. Rather than resent the back 9 – see it as a way to improve your brain for a better game.  Now there’s a hole-in-one-thought that offers you practice opportunities to grow new skills. Start your game with this winning plan in mind and it helps to keep your head down and swing through though –  even on the back nine! 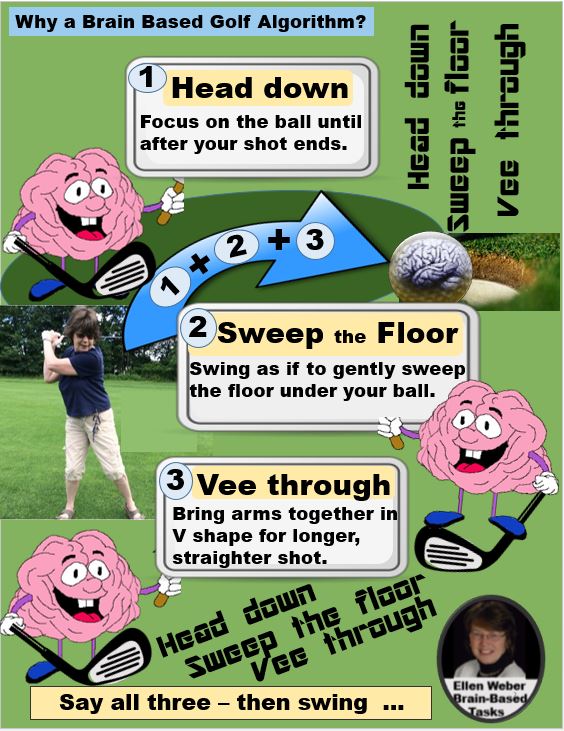 4. Watch fellow players and expect growth regardless of age. Your brain comes equipped with mirror neurons and you can improve your golf skills and optimize your brainpower for better swings at any age. Simply observe what swings work well for others. In spite of a recent bout with cancer, Marjorie Brewer at  60, still swings a driver like a pro and putts like a metronome. She’s out four times a week near the grounds of her law office. People far younger struggle to keep up in one of the persistent mysteries of even an aging brain.  Marjorie found there are tremendous health care benefits to doing what she loves most – golf. But others see Marjorie’s high-performance mind for golf that keeps improving with use. At 58, Murray Jensen expected golf to help his brain to show effects of  cardiovascular disease.  Murray’s doctor seemed surprised by the mental progress and new alertness that boosted Murray’s once frail health. What could a golf game do for your aging mind?

5. Spot and name possibilities rather than challenges. Focus on new developments for your swing, rather than on difficulties that impede your swing. When one hit or putt fails, focus more on improving another shot – with a different club. Regardless of how many obstacles may impede your swing, plan another brisk round of golf’s sheer adventure. See the opportunity in spite of any difficulties and golf’s a mental tonic at once. How so? Golf allows you to capitalize on kinesthetic intelligence and it develops a better brain for business and for balance in other areas of life, than most golfers realize.

6. Risk new moves to gain another skill with each game. Try a new approach rather than fall into the brain’s penchant to default for mental ruts and repeat the same mistakes on a difficult hole. Think back to your last lesson, or to a golf tip you heard, and deliberately give it a shot. The human brain performs better with novelty and risk. When you consider long term benefits that follow from risk and novelty you’ll likely find courage to move a golf skill to the next level. Worth the risk?

7. Pack brain food and walk rather than ride. Improve your stamina with movement and mental nutrition during your next game. Expect your nourished brain to remain fast, your swings to stay strong and your mind to come alert for new challenges, while you build new neuron pathways to golf skills for lower scores. Did you know the brain demands 21 percent of the entire oxygen to your body?  Not surprisingly when you move more through walking, you enrich that supply and add to your brain’s potential.

8. Swing as if to win a top tournament yet accept mishaps as if they didn’t matter a wit. Why? We know from neurogenesis that people improve their lot by beliefs moved into winning tasks. We also know that self-competition reshapes human brains when golfers act to improve. How so? Swing those extra yards, putt a finer approach, Angle a better loft, or chip into the cup, and you literally reshape your brain chemically and electrically for higher intelligence.  Even simple competitive practice, can alter brainwaves up or down.

9. Support peers and practice thankfulness. Encouragement adds serotonin and well being to every round of golf – those that go well, and those that don’t. How so? Serotonin opens new ideas and possibilities, when you need it most. This hormone for well-being is essential to a good game and it is increased on the links when you simply expect it to help you out. Deliberately build more serotonin mental-well-being on the golf course today… by wishing others well as they approach the tee.  Imagine great shots whenever you take another swing, and refuse to focus on bad shots. Look forward in favor of a lesson learned for the next mentally controlled swing.

10. Compete against your own game. Whenever you focus too much on another golfer’s good score, regret over your own is apt to leave your own next shot short. Regret prevents skill growth. Rather than fight despair by comparing your own struggles to another person’s wins, it’s better to mentally spike each swing in ways that improve your weaker moves. The next time you grab a box of your favorite blue golf balls and head out for the links, visualize your best shot from the tee, and then compete against that shot for golf that follows from a high performance mind on the tee.

Ready for a golf game well under par? Find a fun – ready to use –  brain based golf curriculum to help novice golfers and mentor others – with the brain in mind. No prep needed – tasks to engage students as they learn to swing. Let us know how you fare as we’re rooting for you all the way from the algorithmic swing to the final green.