Change the question from HOW SMART ARE YOU? to ask instead: HOW ARE YOU SMART? and you’ll ready your brain for life-changing discoveries. Einstein once claimed he was no smarter than others, but that he simply stayed with problems long after others left.

Could we solve more problems with finer genius, if we used Einstein’s keys to learning? For instance …

1. Mystery
– for Einstein all true art and science embody mysteries to ponder. For you?

2. Ethics
– flamed learning for Einstein, the way rhythm lit verse for Mozart. How does music and belief shape your mind?

3. Giving
– through shared insights held greater value for Einstein, than receiving. What was the last life-changing insight you gained from others?

4. Curiosity
– held Einstein’s attention on a starry sky outside and a moral universe within. What do you wonder about?

5. Truth
– allowed Einstein to remain like a child in its pursuit,  as did beauty. What recent discovery have you enjoyed and how do you create space for others’ truth?

6. Freedom
– of spirit enabled Einstein to stand against violent opposition to his ideas. What strength allows you to get up again without getting back at those who disagree with you?

7. Imagination
– for Einstein trumped knowledge of sheer facts about any topic. Where do you go and what do you do to stoke your imagination and play?

8. Creativity
– allowed Einstein to think like a genius who advocated breaking rules. What risks are you willing to take in order to create a replacement for broken rules?

9. Simplicity
–  in solutions to complex problems was God answering, for Einstein. What complex system or fact did you break into understandable parts for another person recently? 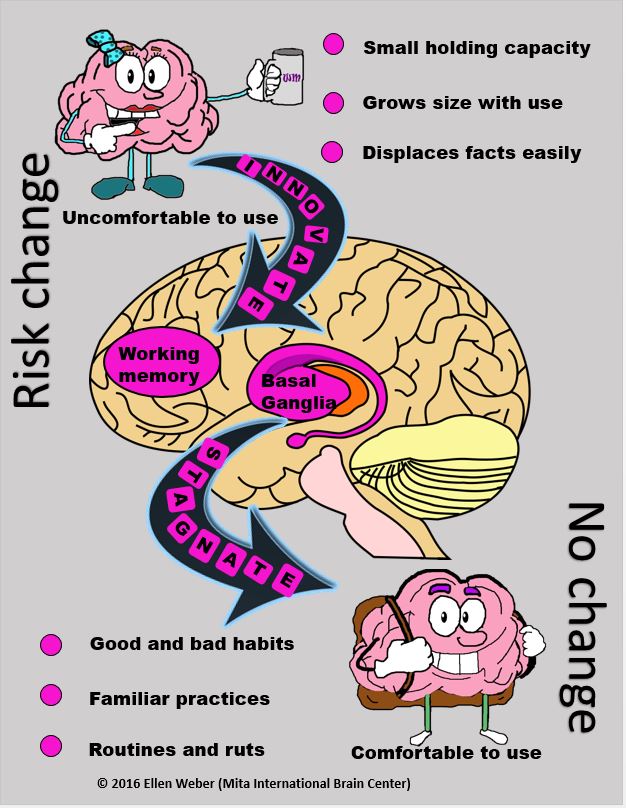 10. Change
– for Einstein meant insanity when people repeat the same approaches,  yet expect different results. What change did you make to a broken anything lately, and how do you facilitate others to design and attempt changes that benefit all?

Easy? Likely not, and for good reason.

Einstein said the only thing that interfered with his learning was his education. You?

Consider  barriers to brainy results, and then let’s take a shot at Einstein’s approach.

Even experts who cling to facts from  past eras, rarely risk innovative wonders for future eras.  Sadly, we sometimes settle for systems built on rickety foundations such as the following.

1). Scientific Method – Rather than invite wonder, and delight for discovery – we’ve dragged people into a jaded sense of self worth. What if each person lived true scientific methods with a mind to discover 4 possibilities? Spot – Wonder – Test – Win!

2. Lectures – Rather than engage, and invent – lectures drown new ideas and stifle original solutions. What if we run from all lectures, in favor of engaging brilliant ideas together? 100 Reasons to Run from Lectures!

3. Mentoring – Rather than reciprocal coaching, that benefits from differences, mentors advice clever cronies to operate much like a seasoned reprobate. What if we morphed into mutually benefiting opportunities to grow?    From Mentor to Mindguide.

4. Fixed IQ – Rather than stretch tasks to make space for more brainpower from all, we operate as if some people are smart and others never will be. What if we saw IQ as fluid, and surveyed for multiple intelligence contributions? Question Brainpower through Mita Growth Survey.

5. Competition – Rather than consider a wider or finer good and focus on ways to give back at times, we push incessantly to advance personally at all costs.  What if we cultivated shared values with ethics at the helm? A Brain on Ethics.

6. Traditions – Rather than learn daily from advances in innovation, we cling to traditions as if broken systems from past offer the best plans forward. What if we dropped one sluggish tradition per month for an advanced magic carpet ride over new possibilities? Wonders and Woes of Change.

7. Performance Reviews – Rather than use laughter to build mental and emotional health, we’ve barred it from places it would contribute most growth. What if comedy helped us to deign innovative possibilities past daily mistakes? A Brain on Laughter.

9. War – Rather than cultivate freedom and liberate humans, war leaves us primed for violence and without regard for humanity that differs. What if we created an icon and plan for peace to match every tribute we offer to wars or violence?   What if we Wired for War or Poised for Peace?

10. Critical Thinking – Rather than offer intelligent responses that critics pretend to bring, brainpower is sadly truncated with increasing waves of cynicism and attacks. What if we harnessed lateral thinking on the other side of cynicism? Brainpower Beyond Sea of Cynicism.

Join our Brain Based Circles! Would love to meet you at any of the following!