Grace is a bit like castles in the sky when we build, dream, and play as children do daily. Childlike play flings open gates into grace so that simple belief becomes love’s warmth, as it did in the fort we constructed to transform Nana’s living room for the day. 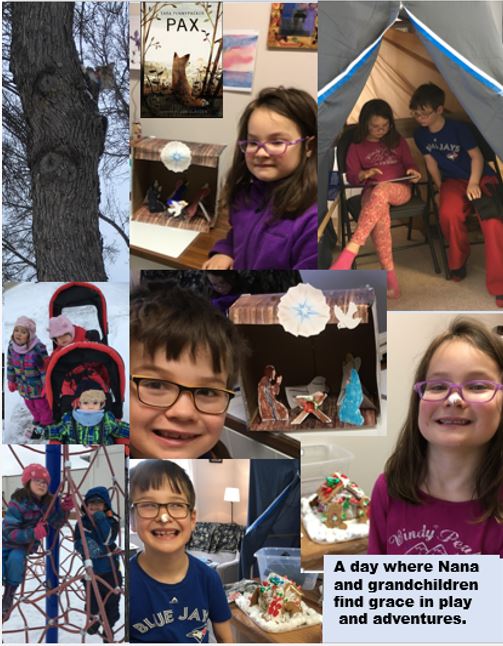 Yesterday my grandchildren and I played at Nana’s while hours melted away in minutes. As the day zipped by, I saw new images that opened into the kind of adventures that define grace as unmerited favor.  Add to that curiosity much like Einstein rode along the curve of the arc in his imagination until he landed into the theory of relativity. As illustrated in the photos I grabbed – we followed fun ideas with a sense of wonder and abandonment. Our brains did the rest.

Are you aware that play favors risk chemicals in the brain and moves us to sidestep ruts and explore new possibilities? For instance, one small step in the direction of new adventures and your brain will trigger dopamine to help you take finer risks with fun results.

It’s based on the brain-at-play-principle – “If you want brilliance in creative answers take time to play with complex concepts.” To weave in spaces for down time, we read several chapters of Pax, and then pulled out a talking stick to discuss war’s impact on humanity and nature.

Play also packs a punch in the grace-filled-feelings we crave as believers. That sense of being cared for at our core that lynchpins diverse parts of a wider view to make sense of each new step forward. We created our own nativity scenes and played a crèche game that re-lived that first Christmas from the perspective of each present at the nativity stable. Yes, we included views from the star, stable and sheep! Then, to satisfy our collective sense of silly we made gingerbread houses and sampled each colorful decoration.

In search of a few wiggles and leaps, we walked to the park near Nana’s. Thrilled to be in the right place at the right time,  we helped a few small children and their mom after a dog chased their terrified cat up a tree. That encounter allowed us the fun of helping to secure a ladder, share a plan, and help rescue the cat much to the delight of this little family and ours.

How will play’s power add grace and build curiosity into your day?

What if we played everyday along arcs of rainbows into living castles – where grace becomes warmth and shelter’s secure. In castle-like adventures much like I had with my two grandchildren, lies the stuff of unconditional love.

Oh, and have you noticed how fun fuels energy with grace, and spreads, just as boredom or drudgery does?

Join our Brain Based Circles! Would love to meet you at any of the following!