What if Veterans Day inspired us to invigorate and celebrate a robust peace plan that offers far more benefits in wellbeing that any conflicts we create? In so doing we’d also reboot our brains with new neuron pathways for peace possibilities to resolve personal, domestic or national gripes.

Let’s say – your plan leads to respect across differences.  Your brain will focus less on battles and more on peace-promoting possibilities. Warrior stories become peace-filled wonders and violent-game-cultures fade.

War and peace both, rewire your brain literally to do more of the same. Either can be taught!

Plasticity wires a nation’s collective brainpower for war or peace

Plasticity, or the brain’s ability to rewire itself, acts like of lightning rod for peace to those who shift their focus from arming fighters to arming people with jobs and learning opportunities. Let’s say you write brain based peace plans to celebrate Veteran’s Day!

That simple focus on peaceful actions literally re-shapes your brain for more wellbeing.

Peace depends on stepping back to reconsider benefits at stake. One leader I met recently admitted that her profitable industry that manufactures ammunition, would fail she could not sell weaponry. I think it’s fair to say that leaders who profit personally from war may not be the best beacons of light toward peace. You? 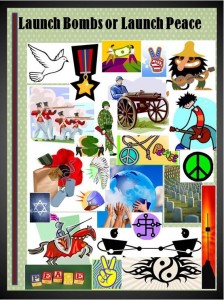 Back to plasticity (or the brain’s change equipment) though…

Because brains rewire with warrior or peaceful actions, our entire nations’ collective brainpower could lean toward peaceful actions we act on . Have you seen groups change?

Look through another’s eyes on a sizzling situation, and it’s as if combat’s no longer the only resort to resolve conflicts, for instance.

Are you wired for war as if combat’s the only resort to resolving conflicts? Or …

Could plasticity rewire you for peace that wins?

Either way – war or peace – the brain alters its plasticity by remapping itself to vehemently follow your focus actions. How so?

Go after peaceful solutions, and you not only increase your mental potential as peacemaker, but you change the very structure and operation of your brain itself. Simply stated, whenever you avoid violence and emphasize peace, plasticity increases your brain’s capacity to roll out admirable solutions for all concerned.

Most agree that to change focus is to change what you do. But have you considered how repetition literally remaps your brain to accommodate actions repeated.

Too good to be true?

Plasticity’s magical fluidity leaps into gear while you sleep – and it triggers your brain to rewires for the next peaceful win, for instance.

What will you do differently this week to optimize your brain’s plasticity? I plan to lay a few more caring cornerstones in my learning community by encourage colleagues to contribute possibilities for problems that arise. Peace presents opportunities at every bend

Those who model civil discourse may not realize their brain chemicals jump into action to fuel change. Words communicated with civility engage us in the process of inquiry over violence – care over alienation and power over powerlessness. You could say they champion those who are down on their luck, the way that famous educational leader Paulo Freire championed Brazil’s oppressed populations in his influential work, Pedagogy of the Oppressed.

Is your brain wired to create calm under pressure?  How we balance mental chemistry with peaceful actions often makes or breaks stressful situations, for instance? It’s true that stress defaults us back to habits – even warlike ways, yet peace remains our harbinger to peace that last.

Neglect brain chemicals, and courtesy rarely remains as part of communication. When somebody slights your sensibility, you’ll simply toss rude barbs back, from stored reactions in your amygdala. Fortunately, brain chemicals also fuel gracious manners and respect much like gasoline fuels engines. The

You could say it demands a bit of brain training to rewire for peace ambassador. How so?

Take time to reboot your brain for more serotonin, and you’ll also fine tune it for civility that connects to unshakable wellbeing. This hormone acts like the brain’s wellbeing molecule in helping to motivate us – from rudeness to respect?

Snip your Amygdala Before you Snipe Back

Did you know that emotions survive after memories vanish? Or do you wonder what moods and behavior heads or hearts control?

Yesterday, on a walk in the woods with a gifted young leader, I once again saw his ethics, openness and willingness to become vulnerable in order to learn new skills. Without notice a mountain biker appeared on our winding path and startled my friend’s dog Jack, who in return snapped at the bikers feet. The 20 minutes that followed taught me again about the value of snipping an amygdala before you snipe back like Jack did. Maybe this warrior pooch will never push for peace, but what about the rest of us when emotions fire us into combat?

As the biker diminished my friend, it was obvious the man’s favorite spot to walk his dog had suddenly lost its magic. From their daily wonderland – the woods became a dreaded encounter with a biker who indicated he planned to ride there daily, and did not expect to encounter the dog. Did you know that in such cases your amygdala reacts from stored responses?

What’s around your next corner that could hurt, or disappoint, or leave you feeling sad or guilty and in mental ruts for days? Any person who reaches out to others vulnerably, like my friend does, also opens pathways to cynics who reject, belittle, or ignore you because they disapprove of who you are or what you represent. Sometimes it’s merely a matter of forgiving a guy who ruined your walk with a dog – to regain good moods. As alluded to earlier – your amygdala also gets involved in harmony’s tool chest. What can be done for balance?

Yet they’ve learned to snip their amygdala before they snipe back or intensify the damage. Have you seen it happen?

Rather than judge a culprit’s motives, regret your own weaknesses, or focus on deciphering what that person could be saying in meta-messages spoken, simply use good tone.  It often starts by naming the problem in ways that opponents see it, rather than deny nonviolent solutions exist. Then take mental scissors to snip your well being from any tethers to maligning words or thoughtless acts. The snipping leaves peace lovers mentally in a place to grow from the experience, or even offer an olive branch in response – rather than in a place of depression or hostility.

Refuse even to argue with yourself about the fact that a hurtful  person may be trying to improve, and instead snip your amygdala from all actions that add sadness or worry. Remember, it’s not about another person, whom you cannot change. It’s not even about the horrors of a toxic workplace.  Instead it’s about replenishing your deep pool of inner wellness, so that you can speak and act with respect even to those who disagree.

Finally focus on alternative activities that offer you challenge, fun or adventure, rather than replay hurtful acts mentally, and increase inner wounds. That divergence offers your brain a gentle place to build new neuron pathways to a healthier you. Through your focus on an activity you value, you’ll also reclaim your sense of wonder about life.  You’ll welcome back that fleeing inner joy.

Have you been confronted with a shattering experience, yet remained calm on your own winding roads of adventure like my young friend? How will you snip your amygdala?

You can truly let go – and break from inner pain or confusion to prepare your brain for a confident and courageous response. Yes, even when you confront a bully’s taunt’s or golf a round that disappoints. Have you seen peacemakers offer olive branches to enemies?

Or have you every compared the differences between brains honed to disagree well, and those who generate cynicism when they differ. Contrast the difference between an olive branch offered to enemies, and a weapon poised for war. What do you see?

Imagine our world communities if we celebrated more heroes such as Dr. David Adams. A retired Yale researcher, Adams helped create a global movement toward a culture of peace. Have Adams’ peace policies reduced violence or aggression as you see it?

According to Dr. Adams, and brain equipment such as plasticity, peace is cultivated daily by people who peacefully solve ordinary dilemmas.  Harmony stands in calm opposition to the violence emphasized in the media and in our culture of warfare. Where will you stand when conflicts or stressors strike, and what resources will your brain offer to settle disagreements?

You may be interested in growing number of peaceful ventures:

What global peace initiative or site would you add to this growing list?

Could Veteran’s Day help us to pause for robust peace that trumps battle plans?

What tactics would you engage to solve conflicts, if war or violence was no longer an option? Perhaps a better way of asking is, “What marks of a peace plan could trump your next battle plan?”

Consider those who act on deep seated beliefs, such as generosity, service and social justice, when pushed into tough places. Then, if you’re willing to imagine peace that trumps war – read on.

When war’s an option, you’ll likely fight faster than people who seek solutions with peace in mind for both sides of the struggle.

The opposite is also true – to live peacefully is to stoke mental engines that carry you past personal conflicts.

Luckily, your brain already holds chemical and electrical equipment you’ll need to implement peace that lasts. Does a bully work beside you? Do personal struggles appear too big for peace? Has past tone poisoned a conflict beyond resolve?

To get started – tap into three brain parts to reboot peace through chemical and electrical activity you generate:

If your mental equipment’s a bit rusty, or somewhat sluggish from lack of use, you’ll be happy to access new brainpower from dynamic parts discussed here. Stressed brains, for instance rely more on habit. Why not reconfigure your brain to operate peace plans that could resolve your next conflict with unexpected benefits. Worth a try?

100 Brain based task cards designed to engage student and young adult  thought, invited group discussions, research opportunities and to foster critical thinking skills to make personal decisions about the value of peace as well as the consequences of war.

Check out this preview to view all ready-to-go materials!