It’s a thing we rarely admit, we go to extremes to avoid, and then we fall into the same pattern again. You’ve likely seen it too. We give Valentines to the wrong people. 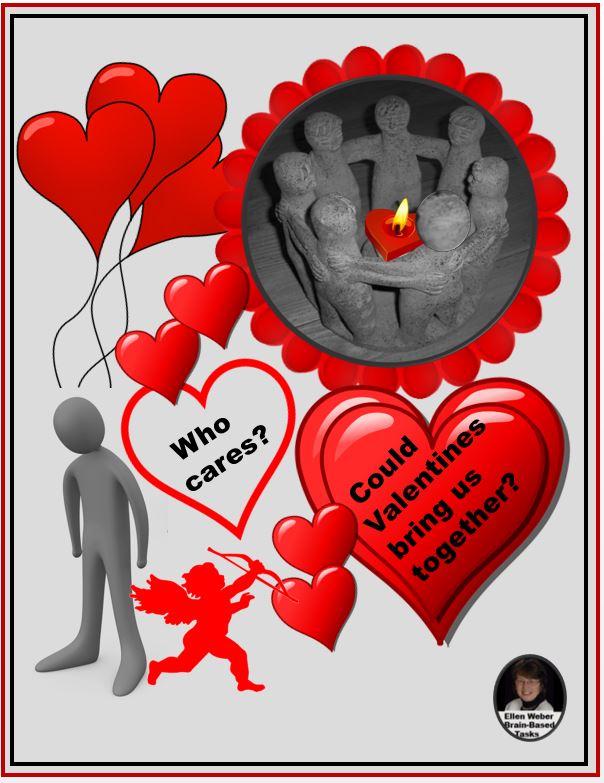 In part, this happens because we lack confidence it takes to let others in to be cared for by our circle. We may even start to believe that only those we chum around with, or those who look like us, could be capable of care. In a wider, more broad-minded circle than our own though, a typical Valentine greeting might be flashed into a sense of wonder or heartfelt response to a question we all ask at one time or another: “Who cares anyway?”

Exclusion may well relate more to our lack of poise than to others lack of personality, and yet compassion can ignite any circle where consideration for shared humanity still stands a chance.

Maybe we feel jealous when someone else forms a friendship with a person we especially like. Or we feel a bit dicey over the person who disagrees with us.  Possibly we clam up in response to rejection that left us outside the circle we valued. Nobody gets it right 100% of the time. The Valentine dilemma is that before we sign a card or buy that box of candy, we fail to consider problems we have caring about others. And whenever people who differ toss the spotlight onto our flaws, we’d rather narrow the circle and be done with it. As for close friends, they don’t complain about our narrow vision as long as our Valentine care goes to them if given out at all.

Our peers are no more mindful. They’re grateful whenever we take a shot at considering them. We hang out together in breaks. We avoid topics that generate disagreements between us. Our friendships give the impression that care is so deep that Valentine’s Day is only a small extension of that. It’s not.

I tried it once you may conclude, and got rejected, so the deal’s done.

Look into any high school or college classroom, and you see kids hanging with their own for what we accept as justifiable reasons: because they knew each other ahead, families know each other, they share strikingly similar beliefs. Faculty and staff rooms follow similar patterns.

From seemingly logical motives, we find ourselves mired in lonely encounters, narrow-minded thinking, feelings of being used, and anger when we catch wind of togetherness that left us out. Our sense of who’s in simply isn’t, on reflection, defensible at all. Friendships inside our circle may secure that primal and close to the surface feeling of belonging. But belonging falls painfully short of the kind of care that holds up under closer scrutiny that Valentine’s Day extends when we draw people in.

What matters most is that thoughtful people are drawn to each other in kindness when we overlook differences to see the human need to be cared for.  Through a kind of welcome that understands differences in ways we pound safer paths forward together. Valentines handed to a few only, become the catalyst of rejection, for people who differ, exert themselves rarely, or come with characteristics least familiar to us.

We give Valentine wonder to the wrong people because we fail to see people who differ as lovable. We also dart from confronting the fact that we each share strikingly similar humanity that craves human affection in much the same ways we do.

Sure, we’ll make mistakes – and we’ll withhold care less for people who we name as unbearable. Yet to be absolutely at peace with our own prickly selves, is to be completely unpicky about extending care to others we meet.

No question, we exclude others to lock in that feeling of continuous care for ourselves. We imagine that reaching beyond a small family or circle of tightly knit friends, will prick a hole in the familiar balloon we fear will burst.  Perhaps we were once left out of the popular kids’ Valentine list. Or we may have run from less popular peers to tether that sensation of care we crave within a safer setting.

In mindful circles, Valentine’s Day holds delightful openings to move us alongside others, make friendly encounters that could unfold in caring friendships, and extend ourselves to become the caring person we’d like others to see in us. The only thing we may hold in common with people we offer kindness to is a Valentine wish. And yet that one expression of care, while it’s not a single bullet for infinite delight, could satisfy our own yearning to be part of genuine care circle that most people would swap exclusion for on a dime.

A person who could use your Valentine wishes most could be the person who sits nearby but rarely speaks, the person who speaks too much, or the person who walks in from another world completely. Rather than some imaginary idea of perfect Valentine exchange, it is the capacity to toss generosity into a wider circle than yours, and in we can each expect back compatibility that begins to bond people as a logical extension of care.

Valentine’s Day is not meant to be mushy memorials that stick security in between two people already satisfied in one another’s warmth.  It’s a reminder to pivot beyond appalling segregation that keeps people who differ out in the cold. It’s also the assurance we won’t end up lonely or bored simply because we’ll be convinced that our Valentine kindness opens wider worlds where unexpected melodies move back and forth freely, from one Valentine heart to another.

Looking for Valentine Day activities that reach out in ELA or Lit. classes, draw people together and create fun for all?

Or want a quick idea that brings Valentine fun into any upper class – while strengthening your learning community in fun ways.