We’ve all benefited from caring and compassionate leaders. We’ve learned from mentors who appear to escape cutthroat tactics that hardwire cynics’ brains.  And we’ve marshaled up victories with coaches who spearhead care. Most of us at one time or another, build or find the kind of support that advances people and avoids greed.

And yet our national and global leadership crisis proves our desperate need to model and teach a new and gentler kind of trailblazing. The kind of courage that many crave when challenges arise, and the kind of fearless humility that will guide our collective kick-start into a new era.

Less familiar though, is your brain’s role in leadership development, and your mental equipment to apply either good or bad leadership. Let’s start with the bully or cynical leader to see how it works. 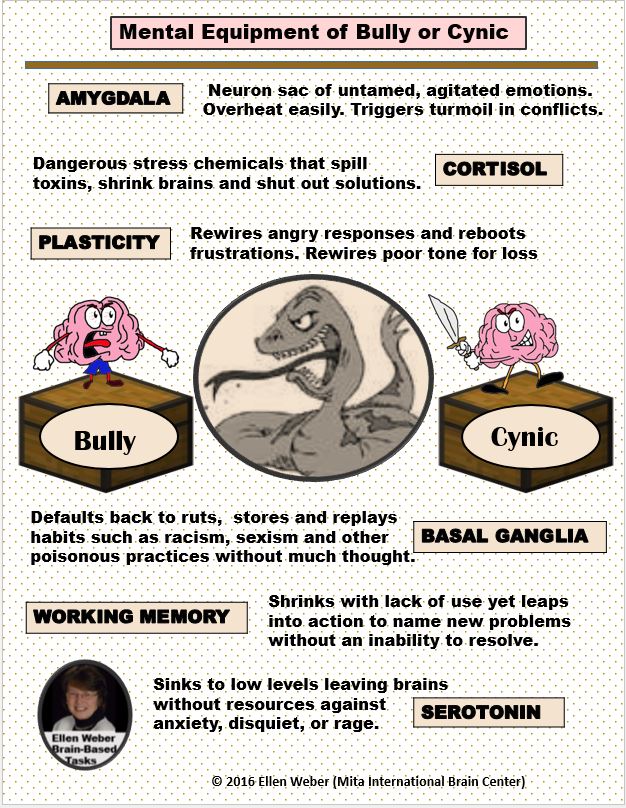 Fear tactics or stress over-stimulate the amygdala and excite the brain’s circuitry. Threats, for instance,  increase dangerous cortisol chemicals and lower levels of serotonin, the adrenalin for well-being.

Evidence of negative connections may include behaviors that:

Now contrast these toxic mental states to the brain on care and kindness.

Have you seen leaders’ cutthroat behavior that adds toxins to a team? Social psychologist, Dacher Keltner spent a lifetime looking for its opposite, kindness – as it drives human brains.

How to nudge care in and cynicism out of communities?

Evidence of positive connections include behaviors that add to meaningful lives:

To some extent, the choice derives from our parents, our communities, and the particular historical era and cultural group in which we are born and grow up. But in the last analysis, the choice of what to be, and how to be, is ours and ours alone.

Without doubt, each act of kindness rewires the brain for caring solutions, just as each ax lowered by cutthroats wire for further swings at the problem. It’s not always apparent at first whether a leader is kind or cutthroat. Have you ever seen one disguised as the other?

One friend and fellow leader Dave Caiazza, put it this way:

Work against the dangerous twins of jealousy and hypocrisy. They come disguised as concern, shrouded in statistics, and hidden behind a smile. When you’re good at something, there will always be someone who wants to undo you. Don’t let them.

How will kindness transform your leadership today? Find many additional student ready materials to cultivate the kind of care in a community that builds learning opportunities for all, at my TPT site.

6 thoughts on “Your Brain on the Power of Kind! Cutthroat or Care?”