Imagine a learning and leading circle not handcuffed to past sarcasms that exclude some, but freed with humor that benefits all! Build mental muscle that transforms sarcasm into humor that fosters learning and raises IQ for many!

People who enjoy sarcasm defend its harsh, bitter derision as mere irony and an inevitable part of life. Many even admit to loving the zing that sarcasm snares. Some secondary schools seem to both celebrate and champion ridicule, while others crave less acute ways for wit than shocking people with sarcastic tone.

Do you favor jeers for jokes?

On one side you hear secondary faculty and students defending sharp taunts as the irony of intelligent talk. On the other side students and faculty alike run from sneering and cutting remarks that take others down in the name of sarcasm.

Like it or not – sarcasm impacts learning for entire communities, in that the human brain reshapes itself (and formats learning) one way for sardonic and another way for sincerity.

Sarcasm, some argue spikes levels and intensities of nastiness. In either case however, its use over time will numb secondary school brains to several side effects.

If you detect sarcasm in your tone or your teens, you’ll be especially interested in the far reaching mental impact of mocking, contemptuous tone, or ironic language used to convey scorn or insult. Let’s say a student arrives in class a few minutes late and the teacher stops and makes the comment, See you are here right on time again Jake! The sarcastic remark levels cortisol in Jake’s brain and in others – so that learning can literally shut down for those people. 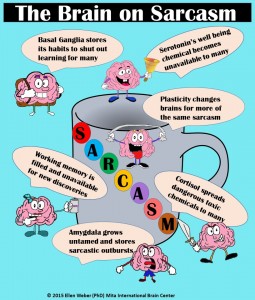 Below are six areas of your brain that impact learning or leading in cultures that foster humor or sarcasm.

People who say they love to use sarcasm likely have never experienced the kind of humor that benefits brains without taunting irony. On the other side of sarcasm’s tearing down of discovery or blocking the wonder of innovation lies sincere humor. Brain based learning cultures foster talent growth for all in a setting that can rely on trusted communication as genuine.

That’s why the Mita International Brain Center supports a brain based culture – built together – without sarcasm – and with possibilities of wonder evident for all.

Where does your secondary school culture lie on the sarcasm – sincerity scale?

See related secondary ready-to-go materials that foster humor that builds mental muscle for all,  prevent bullying, build a brain based culture at secondary, and teach tone to disagree while building goodwill with those who differ.

3 thoughts on “Transform Sarcasm into Humor with Mental Muscle”