Tom Hansen said it best, Most Meetings Suck!  Hopefully you’re not the bloke who leads such gatherings though. In that case,  brain based approaches offer results that transform meetings into vibrant round-tables that you and your peers deserve.

Interested in mental keys to transform a boring meeting? 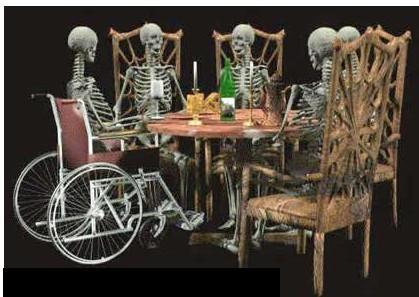 Here’s a glance at takeaway tactics you can expect.

1. What one tactic moves a meeting from boring banter into possibility planning?

2. What was going on inside Tom Hansen’s brain, when he stated that most meetings suck?

3. What hot-as-a-pistol trigger could fire  your next meeting?

4. How can an ordinary gathering uncover unlikely genius?

5. Since people retain only 5 % of what’s heard, meetings should …?

6. How will your next meeting bring out bullies or brainiacs, but not both?

7. How could your meeting fuel brain chemicals for creativity or that dose novelty?

8. How can your meetings avoid death by PowerPoints that short-circuit IQ?

9. How could your meeting ramp up the bottom line by using both sides of the brain?

10. How does a brain literally reconfigure  itself during a dull or dynamic meeting?

View ASTD’s Free Video for your Meeting Revolution – and add twitter responses for a lively exchange at #Mitameeting.  Together we’ll build neuro solutions as doable realities that benefit your entire organization.

Which one of these brain-froendly tactics will turn your next meeting from wasted time to wonderful opportunity?

See innovative and practical strategies here that bring meetings alive where you work.

Ask the lecturer in this video and he will say he engages listeners.  He might even go on to suggest today’s audiences expect too much and give too little. Ask listeners and they may support these 100 reasons to run hard from lectures!

Have you considered lately how …

Not surprisingly, research backs Hansen’s claims and then some! Consider 5 reflections before you plan or attend the next meeting.  Then bolt from everything that resembles the traps you got glued into by Tom Hansen characters – who OWN the meeting.

5 Brain Considerations that Should Cancel all Meetings as We Know and Endure Them:

1. Speakers bore you for good reason! Few speakers realize that less than 5% of what listeners hear, actually sticks. That’s according to research from National Training Lab and quoted by Geoff Petty in Teaching Today. Makes sense, wouldn’t you agree? Let’s face it – whenever one person drones on, every other brain in the room wastes time, as the entire group tosses talent out the window. Far better to grow brain cells for the meeting’s agenda by engaging multiple intelligences that come with any gathering. The meeting then moves from boredom survival to ramp up IQ for applying results.

2. People dominate or worse, they  bully at meetings – with a kind of tone that shuts out opposing views. Have you seen it happen?  In one blow, tone can kill initiatives and stomp out the best ideas from those who differ. No wonder participants head for hidden seats in the back, where they can at least text a friend or check email.  It seems better to most, than enduring words or abiding a bully’s body language that promises surefire demise of any healthy exchanges.

3. PowerPoints short circuit brainpower in most groups, so that people in the meeting tend to zone out long before key points are made.  Some slip into sleep mode, while others seethe silently, and a few  pretend to be fixated on the PowerPoints bells and whistles.  Initially the colors and frames may act as mild pain killers, but not much more. Similar to monologues slides and graphs, can power down a groups’ brains and rock folks to sleep.

4. Lack of connections between what’s spoken at meetings, and what’s experienced by participants, come when leaders live myths about the human brain. Reality connects to people’s brainpower by unleashing dynamic ability to transform stuff spoken in meetings into mutual benefits at work. Harmful myths such as venting gets things off one’s chest, prevent people from seeing how venting creates toxic neuron pathways for more venting. Or myths about cynicism that disguises for humor and adds conflict. Or that disagreement is a bad thing, simply because opposing ideas are not facilitated well. Even myths about the fact that what’s good for men is good for women, disregard the wonderful neuro-discoveries for both genders and can leave some people shut out mentally.

5. Inability of leaders to facilitate so thoughtful people are silenced, rather than helpful. Effective leaders facilitate more brainpower by asking 2-footed questions, rather than talking at people. They target improvements in briefly stated goals that generate new neuron pathways to higher peaks. They move change along through multiple intelligence challenges. And they facilitate reflections that stoke create innovation to reach the next levels, in ways that override the brain’s default for ruts.

What could your next meeting do differently to open opportunities for more brainpower from intelligent participants?