To be honest, I wanted to lead excellence, far more than I wanted to design a mental model or create a brain based site  to make it happen. Had there been a model out there that valued people of all cultures, or that led excellent results for all, I’d have gladly run with it.  Yes, even gladly forfeited a life’s work to design the brainpowered leader approach in this article.

Had I located more managers who invited wonder, delighted in new discoveries and supported people to live the scientific method for the sake of new discoveries, I’d have leapt for joy to lead with it. Instead, managers I met seemed settled in a maze of myths about entitlement wrapped in leadership roles. 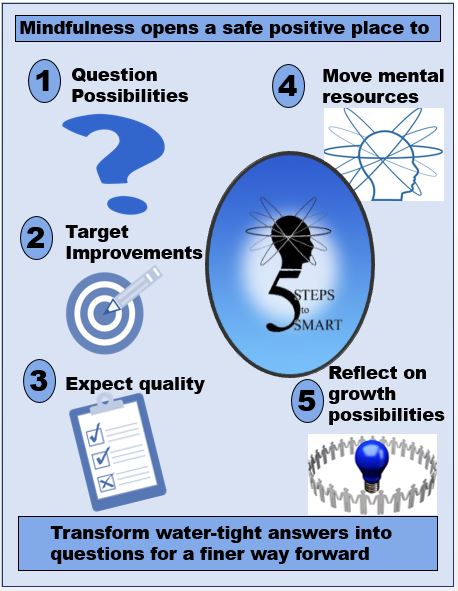 Had I found curious managers, for instance,  who engaged and investigated new ideas, rather than talk as insular experts at meetings, Mita’s brainpowered approach wouldn’t have been necessary. To think I’d have saved 30 years of global travel to consult leaders in many countries and learn from diverse cultures.

Rather than promote broken traditions or foster rigid routines, I spent a lifetime riding an advanced magic carpet over amazing wonders and woes of change around pillars of excellence illustrated in figure 1.

If mentoring had resembled reciprocal coaching more, I’d have embraced it.  I’d not have bothered designing Mita’s mindguide approach which teaches and learns as it leads. Or if conventional managers had modeled the fact that IQs are more fluid than fixed, I’d have grown new capabilities with them in response. Just that one lived reality would have helped to find more of the leadership excellence I craved. Where was the manager who reached for the wider good or cultivated values and ethics at the helm?

I tossed around questions, such as: Could leadership shape mental and emotion health for people – promote more laughter and prevent unfair performance reviews? I’d have helped its contribution to ratchet up workplace well being. Instead I added another critical component to Mita’s approach as a way to ensure access into the brain’s heightened capabilities through laughter.

Increasingly,  people lament failed  leadership, as they observe political leaders unprepared to engage civility or without skills to learn from opposing views. Wasted possibilities of talents that could be managed yet seemed ignored, compelled me to harness multiple intelligences into brainpowered tools for a finer future.

Had managers helped workers rewire more for peace that cultivates freedom, liberates humanity, and leaves folks primed for shared solutions – rather than settle for violence or war, I’d have jumped on board. Instead, holy cows of critical thinking, promoted cynicism and truncated innovation by default, so I ran to brainpowered tools. Determined that Mita approaches could lead adventure on the other side of cynicism, I regained hope alongside managers I admired.

Check out the ratio between what people and organizations might have been, and what they’ve become, and you’ll likely agree that rejuvenated leader approaches are urgently needed. It was that reality check, that launched Mita brainpowered tools with so much positive global response.  It’s also why the Mita International Brain Center continues to align workplace progress with dynamic neuro discoveries.

After years of working across many countries and cultures where tone-related-gridlocks too often limit managers, Mita’s five pillar approach,  both cultivates and sustains tone just as it fosters innovative initiatives as norm. How so? 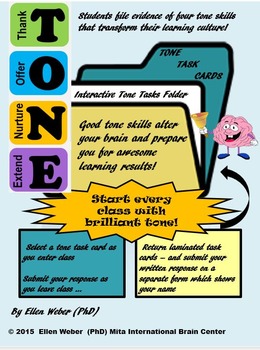 (1) Question possibilities with the kind of tone that engages opposing views, while at the same time building goodwill among those who disagree.

(5) Reflect on sustainable growth possibilities – in brainpowered celebrations– hosted across your entire organization to cross pollinate ideas and track initiatives.

Each pillar finds roots in seventeen learning and leading theories, is impacted by relevant neuro discoveries, and applies to diverse cultural practices in several countries where it was implemented and designed. Constructed to counter workplace toxins (see green boxes in figure 1), the model offers entry points for rewiring the brain in ways that promote innovative growth across differences.

Growth in the chart above, is (illustrated in top boxes of figure 1) results from implementing all five brainpowered pillars, while any one omitted (as illustrated in empty boxes) results in commonly encountered barriers to corporate innovation (represented in far right boxes.)

It’s time for an innovation model to support managers as cultivators of advanced potential in any organization.  Have you seen it in action?

On Mita’s most basic level,  brainpowered tools simply equip managers to help drive winning productivity.  Leaders like you drive its engines. How so?  Three problem areas  urgently need to change before prosperity can surface.

In leadership courses at graduate levels Mita leaders facilitate,  excellence as it shapes three areas: 1. Tone that builds goodwill, and reduces toxins among those who disagree; 2. Talent that converts hidden and unused cognitive capabilities into cutting edge workplace solutions across formerly isolated silos, and; 3. Training (or mindguiding) that drives innovation for ongoing novel ventures. A closer look shows the pitfalls and the possibilities for all three.

How would Mita’s brainpowered tools equip you to lead goodwill, unleash talent, and mutually engage others for a finer future where innovation is the norm?

One thought on “Mita Pillars for Excellence”