Mita survey equips leader brains to win! The 268 page book’s  so new it’s still in draft form – and yet already  getting rave reviews for winning approaches. Comment below to confirm! Responses and what they hold for leaders – will follow in a few days.   Complete each survey… Read more »

Countless writers and commenters agree to Job’s genius that changed our world with technology.

Lohr’s post points to Job’s growth from mentor in his earlier years – who …
… was notoriously hands-on, meddling with details and berating colleagues.

Yet later, Lohr reflects, at Job’s second stint at Apple he differed, in that he

… relied more on others, listening more and trusting members of his design and business teams.

Mentoring in today’s corporate culture looks a lot like hands-on meddling – that tends to replicate past possibilities and miss genius gateways forward. Have you seen it?

Ever have a day when work became combat, and your workplace a war zone? When problems arise, the last place leaders look for solutions is within differences that caused battles in the first place. Have you seen it?

Gary, manufacturing manager in NY, is more typical of leaders we meet who see differences as the cause for poor tone. We have constant problem because union reps, “stick their noses into everything, cause trouble for the entire company”, he said, ”They make no effort to help with anything,” he went on. 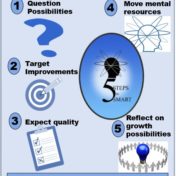 To be honest, I wanted to lead excellence, far more than I wanted to design a model to make it happen. Had there been a model out there that valued people of all cultures, or that led excellent results for all, I’d have gladly run with it. Yes, even gladly forfeited a life’s work to design the brainpowered leader approach in this article.

Had I located more managers who invited wonder, delighted in new discoveries and supported people to live the scientific method for the sake of new discoveries, I’d have leapt for joy to lead with it. Instead, managers I met seemed settled in a maze of myths about entitlement wrapped inleadership roles.

It’s remarkable how far study of the brain has come in the past two decades. The upshot? Managers could capitalize on neuro-designed tactics to meet unique challenges. Leaders could come away with dynamically innovative ventures. Imagine workplace advances that fit the innovative new era we’ve just entered. Consider the missed genius for those who linger behind.

Conventional approaches won’t get past gridlock or compromise as seen in the lack of punch needed to stretch and grow new job opportunities. We have a long way to go, when you watch toxins stunt growth in less resilient workforces, while morale tanks. Loss and failure’s no surprise, when disconnect exists between what brains do well and what managers neglect to do. It doesn’t have to be that way.

Recently we watched national leaders lose what could have been a life-changing opportunity for world class growth. Sadly, they settled for gridlock with compromise at best. No wonder markets plummeted – along with a nation’s hope and trust.

Beyond Gridlock and Compromise

Imagine instead if political leaders had led diversity as a noble concept? Have you noticed how people tend to pass over what differs, judge harshly what they lack courage to try, and reject approaches that seem less familiar?