Albany needs ethics reform NOW according to today’s New York Times editorial. My question is bigger. Have we rewired our nation’s brainpower to live without ethics? If so – we also wired collectively against brilliance and growth! What do you think?

Yet we’ve all felt the positive impact of a person who makes an ethical choice – with others in mind! We’ve all struggled with forgiveness.

Another amazing example of ethical IQ in action –  Sofitel management reported to police a powerful world leader who violently attacked an immigrant maid. Bravo! Rewards will likely escalate as in any highly successful business built on truth.

Potter Stewart said it best, “Ethics is knowing the difference between what you have a right to do, and what is right to do.”

Unethical behavior, in contrast, exonerates rape if even one lawyer opts for greed or notoriety, over doing what’s right. Sadly,  entire nations pay the price when you rewire a brain’s circuitry to accept lust over love, war over peace, or cynicism over care.

Do you crave a new kind of community where justice exists because it sustains the right things? Yet it rarely happens in some business structures we defend as norm.

You don’t have to be the sharpest knife in the drawer to cut out ethical behavior, and short-circuit what’s legal at work.  The cost of wiring a culture for fast talking lawyers who lie for money or pose for prestige – though – comes with hidden price tags that bankrupt human brainpower.  Spot any abuse or outrageous expenditures of inhumanity in your organization?

Until we close dangerous gaps between ethical and legal practices, savage costs will continue to rise, until ordinary people can no longer pay.

Imagine if ethical rules of conduct required people to do the right thing as defined by responsible leaders in our diverse communities. At Mita, it’s called raising Intrapersonal IQ for a brainpowered climate. It’s about ethical conduct as agreed upon, and about evidence expected in behaviors, much like laws are written, approved and enforced by leaders at state or federal levels.

What would it take to ratchet up values for a brainpowered climate that could salvage a falling economy?

Not only does the brain shape culture,
Culture shapes the brain. (Norman Doidge, MD)

You know ethics rewires your brain’s plasticity daily, if you:

How would ethical conduct define brainpower and sustain growth where you work?

Not surprisingly, each time you act on an answer to that question – your brain rewires itself for a more ethical approach to your day. That’s the delight of a brain on ethics.

Looking for brain based questions that raise character and ethical  IQ? 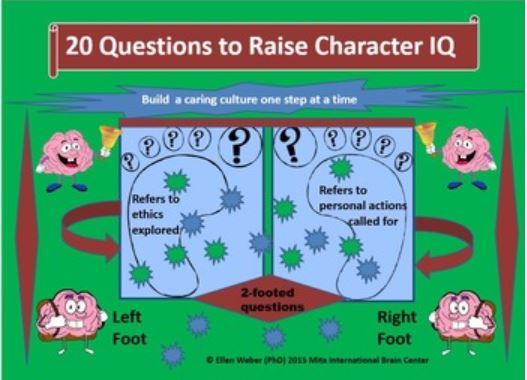 10 thoughts on “A Brain on Ethics”