(Expect a full chapter soon on Mind-guiding – or mutual exchanges where all learn and all teach – as an invited chapter to an international book on mentoring with Wiley Publishers). Both  experts and upstarts claim to see unlimited potential in shared wisdom. Yet seasoned mentors too often advise clever cronies to operate much like themselves, with little regard for rapidly changing horizons.

Few would disagree – it’s time to shift tutoring approaches to reflect more balanced and reciprocal coaching. Guidance based on mutual brainpower potential, and experience from differences, rather than on entitlement, age or seniority.

In my capstone management course, Lead Innovation with the Brain in Mind, one newly  coined term – mindguiding – changes the management structure of any organization. How so?

Mind-guiding, defines a reciprocal learning-leading process, that highlights neural pathways to innovative results. It’s a new way to lead big ideas, and learn new talents at the same time. It sidesteps moodiness of a few senior players, but supports serotonin-led innovations at many levels.

Using 10  tools below – mind-guides set a mutual stage for clever results across differences. 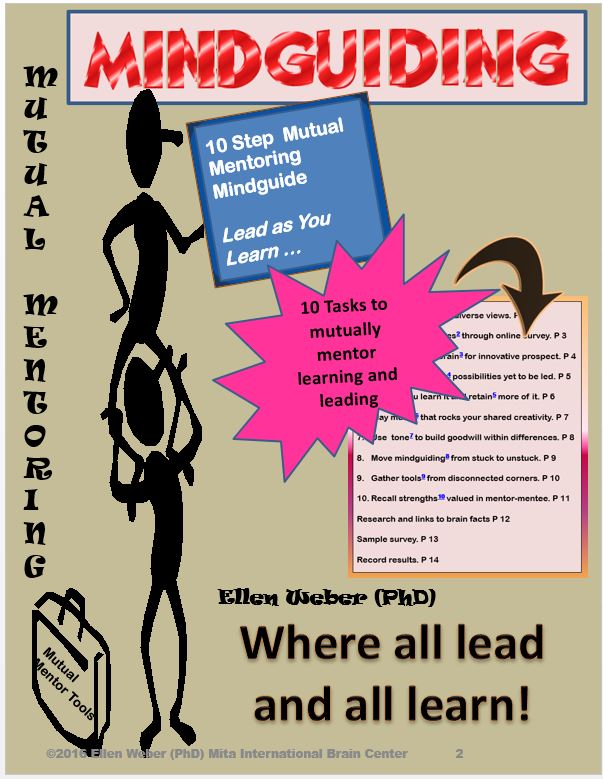 New neuro-discoveries change the roles of mentors from sage-on-the-stage mentality into more of a mindguide to the side, who comes to teams in learning or discovery roles. Just as mindguides see their role less as lecturer or talker, they also listen with their brains – in ways that open new opportunities for those they support.

1. Focus on gender preferences and interests:  According to researcher Dr. Michael Phillips, a neuroradiologist at the Indiana University School of Medicine, Indianapolis, brain scans showed that men listen to language which is located in the left brain, for instance, while women use both sides, including the right brain’s more creative capabilities. Dr. Robyn McMaster points out that women or men lead better – when they focus in novel ways, on engaging others’ interests. Mindguides value men, value women – and facilitate both – while mentors tend replicate old boy practices to include female brainpower.

Suggested Brainpowered tool: Vary communications – seek out people who differ from you – so that novelty enters the mix in ways that teach both genders. New research about novelty’s power for mental growth shows how original ideas offer positive experiences to those who take advantage and learn from differences.

2. Technology changes how brains learn and how mindguides lead: Digital sound bites shift topics frequently,  and allow for specific searches on multiple topics. These new learning practices also rewire brains to catch brief bits of significant information, rather than remain focused for long periods on any one detail. Technology, however,  offers challenges to mindguides not familiar with digital approaches and their impact on brainpower.

3. New digital imaging devices prove that listening changes the brain when acted upon. Imaging such as PET, fMRI, and magnetoencephalography (MEG) generate interactive images to show the anatomy of the brain. They also show brain operations involved in listening. Listening operates from three regions of the brain that support how we listen and how we learn to listen better by acting on what we hear.

4. Mindguides identify familiar features to highlight big picture: By observing cortical activity when people hear words researchers are beginning to see how people categorize words they hear. The back half of the brain’s cortex is devoted to recognizing familiar patterns, such as a cat’s meow, a baby’s cry or a familiar business brand.

5. Mindguides apply what’s learned, with more focus on listening: while mentor hearing differs- is more  automatic, and can be less effective. Modern brain images show that when you really focus on listening, you engage areas in the prefrontal cortex.  This area of your brain organizes and prioritizes what you hear, and stokes actions that as Fuster (2003) points out, allows you to use what you hear to interact with the world. Focus helps you to create meaning by holding what you hear in your working memory, match it up with what you already know, and predict what to do with what you hear.

Suggested Brainpowered tool: Mindguides apply what’s learned in ways that embrace differences, such as gaps between genders, or differences between an ethical and unethical worker. It may simply be distinctives between different rhythms in background music at work. Mindguides capitalize on differences to discover and lead innovative directions for renewed results.

6. Music or speech impacts emotions, impact moods in ways that motivate people, and can add to focus for mindguiding. Great music, such as baroque  stimulates the brain to listen more effectively. To ensure good attention, it’s important to offer multiple ways for people to recognize parts of what is communicated. When print dominates a culture, for instance, learning skills can begin to  fade. With new social media, variety however, has escalated.  New media and technologies such as ipods or even the web – have increased people’s listening capabilities, and raised its importance.

Suggested Brainpowered tool: Mindguides seek advice about ideal learning settings from diverse leaders you admire, and act on advice received. In so doing, mindguides engage the plasticity that reshapes human brains to  advance in multiple ways.

7. Mindguides communicate with tone that connect growth to emotions so that new insights stick. Other advantages are given when interactivity is possible, so that mindguiding experiences link to people’s unique preferences. Learning depends on levels of commitment and also on developing expertise and talent to communicate with tone often seen in innovative mindguides.

Suggested Brainpowered tool: Mindguides step back from heated situations,  tame an amygdala, and hear heated issues through the other person’s perspective.

8. Awesome rewards come from mixing in different communication approaches. Researchers found that some music genres offer the same kind of pleasurable learning experiences as food, drugs or sex, for instance. The enjoyable act of engaging music – releases dopamine, a neurotransmitter connected to pleasurable rewards. The key is to create a pleasant setting for every mindguiding session.

Suggested Brainpowered tool: Mindguides laugh at themselves– yet run from cynicism, that brings cortisol. They focus more than most mentorships – on spreading serotonin chemicals. Serotonin and other neurotransmitters for well being support mindguides’ learning and leading skills. Do you see similar approaches in typical mentor programs?

9. Social media offers more integrated views on mindguiding  topics.  For that reason, a wider and more integrated approach has altered what people come to crave in the kind of opposing views presented by radio stations such as NPR in the US or CBC in Canada.

10. Mindguiding improves the brain’s hardwiring. Each time a person interacts with others and with new insights that interest, they strengthen their capabilities to interact with additional new ideas and with different approaches.

Suggested Brainpowered tool: Repeat or do one key nugget learned. Lack of doing or applying, creates passivity habits operated from the brain’s basal ganglia. Each time people act on what they learn, they rewire brain cell connectors and reshape mental ability.  Ready to reshape learning abilities stored in your brain?

You’ve likely noticed that – in each brainpowered tool above, diversity and rawboned talent become mental assets for more than what mentoring views as minions’ benefit. In mindguiding approaches – both sides learn in all sessions, and both sides also lead at times. Mindguiding –  will soon be a full Chapter in Wiley Press new International Textbook! As illustrated above, mindguiding offers human exchanges that generate wisdom across differences by respectful debates where all listen, all learn, all teach with humility that values ALL. Worth a try ?

How could typical mentoring practices in former teams – morph into mutually beneficial learning opportunities from mindguiding where you work?

16 thoughts on “From Mentor to Mindguide”