1. Trust builds the kind of chemical and electrical circuitry that sparks confidence and intelligence. A lifetime gift!  No wonder The King’s Speech is winning top awards, as it showcases the trust lost in many circles, craved by most and often regal in its healing and growing power when present. 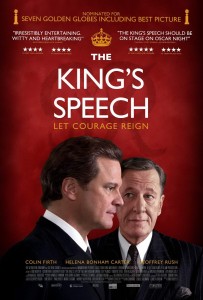 10 Brainpowered Wonders in The King’s Speech

3. Music focuses the brain in ways that conquer difficult challenges in innovative ways. Bertie, father of Queen Elizabeth II, regains speech, as Lionel engages musical intelligence.  Music offered brainpowered tools to  bypass cruelty and teasing Bertie suffered as a child in a royal family – because of his debilitating speech handicap.

4. Kinesthetic intelligence moves you beyond what linguistic and intrapersonal intelligence lacks. Watch movement work magic to rewire Bertie’s broken skills, and you’ll gain hope in areas you can reboot victory, through movement as a brainpowered tool.

5. Brainpower remaps skills in healthy parts of the brain, by bypassing stagnant or broken parts.  What broke in Bertie’s childhood, through harsh parenting by his dad, King George V,  rebooted when Lionel helped him to  remap in other brain areas.

6. Working memory integrates novel facts to generate renewed skills.  In spite of huge  discomfort  at first,  Bertie overcame failures, when Lionel guided him  to overcome harmful habits. Over a lifetime bad habits are stored in and operated from, the brain’s basal ganglia.

7. Humor relaxes the brain and often opens new opportunities for the brain to engage. This amazing movie should also win to awards for foreshadowing miraculous brainpower that comes to those who discover humor’s elixir, and who work it into brainpowered tools as Lionel in hilarious situations, before and after Bertie became King George VI.

8. Interpersonal intelligence engages others best in curious, equitable, and caring situations. Plagued by his trademark stammer Bertie engaged the help of an innovative speech therapist who the world bypassed for his lack of traditional credentials. Through brainpowered techniques, and an unlikely friendship, Bertie rewired flawless speech, and reclaimed bold leadership ability to guide England through war.

9. Amygdalas tame whenever people add strategies that calm.  Stress and fear problems sometimes come from childhood trauma, or neglect. Bertie’s flared amygdala, added stress that literally shut down normal functions of his brain, and left him unfit to perform his roles as king.

10. Failure rocks brainpower into top success, when people find the support to win. With help from his now famous speech therapist, Lionel, Bertie ascended to the throne, after his older brother abdicated.  He took the helm in difficult times,  just prior to Hitler’s proclamation of war on England. Few leaders had answers for Bertie when he jolted back into basal ganglia patterns under stress, yet he was able to harness former failures into brainpowered tools to lead well. He understood and cared about his people far more than others in his family, who’d suffered less failure and who’d been given more breaks. As to awards for this masterpiece?

Along with the 12 Academy Award Nominations this film deserves the best Brainpowered Tools Award for depicting innovative brilliance that inspires us all, in spite of setbacks.

6 thoughts on “10 Brainpowered Wonders in The King’s Speech”