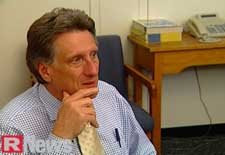 Let’s cheer on Bill Cala and let’s find new ways together in 2010 to support his innovative global entrepreneurial initiatives to prosper others. Bill directs Joining Hearts and Hands, and takes a hands on role in the new Regional School he’s spearheading in Rochester.  Why support Cala when other top leaders too deserve your shout?

Dr. Bill Cala leads with a sense of service that defies the rise and fall of finances. Just retired from a busy and highly successful superintendency, Bill brings hope to hundreds by schools he raises and supports in Africa.

In addition, Dr. Cala is currently launching a high-performance Regional School here in Rochester, NY. Bill plans to lead an organization for disadvantaged youth from urban areas to learn and lead alongside advantaged youth from suburbs. His idea is for mutual learning and teaching that brings together differences in ways that benefit all, and builds community.

Bill spends personal finances extravagantly to fund much of his philanthropic work, is highly respected and sought after from areas of both learning and leading, and serves with unique humility and passion.

While most business and government leaders in my area cut employees and slashed programs, seeing only financial crisis, Bill gave back more because he saw how others were harder hit by broken financial systems they must deal with daily.

Bill and his wife Joanne, travel to Africa each summer to oversee several schools and water systems they built in extremely poor areas. Then, for several months following, he facilitates many highly successful leaders here in Rochester, to give back to disadvantaged and those in need.

As a renewed leader Bill leans toward transformational ethics, reconfigured intellectual systems that work more for youth and less to sustain bureaucracy, and mind-bending generosity that gathers the best and brightest together to build and serve those who possess less fortune, for whatever reason.

I’ve personally been deeply inspired by Dr. Cala, and yet I know that I am only one of many who rejoice that he won admission to this year’s World Business Forum at Radio City Hall on Oct. 6th and 7th, 2009. Thanks Bill George and WBF09 team for recognizing an admirable global leader from Rochester, NY.