Only after you hit unethical walls raised by scorn from the cynic, do you value freedom flights toward its opposite – the curious mind. I’m speaking of that chronically negative person, who expresses disdain for innovative ideas, where stressed brains rely on habit and distrust reigns. 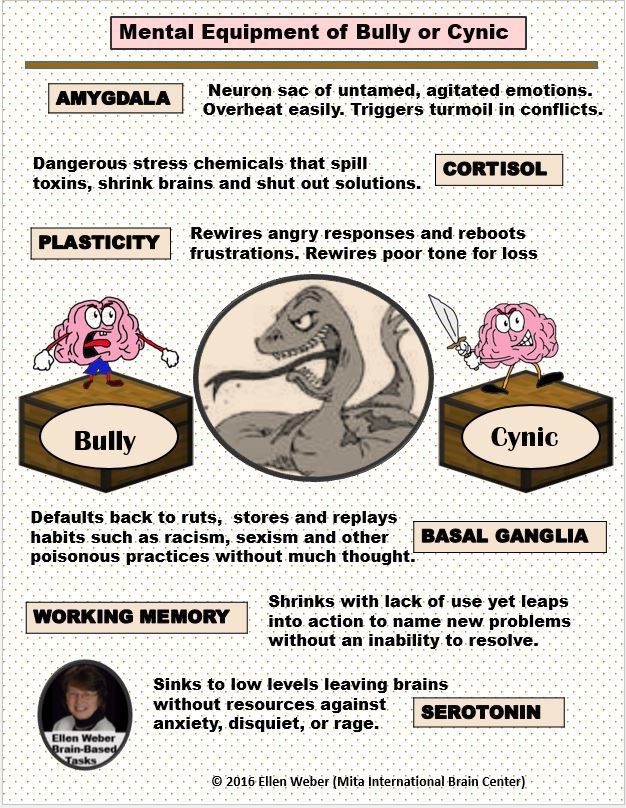 For Russel Lynes, cynicism’s the pseudo-intellectual’s substitute for intelligence. For Norman Cousins it’s intellectual treason. For you? However you define it, the cynic’s brain leads a direction of disaster by tone that rushes to highlight the worst.

Have you ever considered the mental equipment alive and active within brains of bullies and cynics?

1. Amygdala for the cynic is that tiny sac of neurons that remains agitated most of the time,  overheats easily,  and triggers turmoil as an emotional pattern. How do you tame your amygdala?

2. Cortisol releases from cynics like falls at Niagra, as its potent chemical slams people into stress that  shrinks human brains. What tactics do you use to counter that cortisol surge?

3. Neuron pathways for cynics create disagreeable expressions of gloom, and habitual synapses can reshape moods or jade perspectives into permanent problems over time. Can you see how today’s actions shape tomorrow’s brain?

4. Plasticity rewires the cynic’s brain nightly for angry responses, and deep seated frustrations. Outwardly,  poor tone packs punches that cripple opportunities to prosper. Rewire against cynicism by doing its opposite, since every action you take today helps to reshape the brain as you sleep tonight.

5. Dendrite brain cells connect negativity to negativity in the mind of a cynic, to regenerate mental stagnation not seen in the curious. Practice one positive act and watch chemical and electrical activity reboot you mentally for more of the same.

6. Basal ganglia, with its propensity to default back to ruts,  stores and replays worst habits of cynics til others can cite their complaints by heart. That’s why you see some people locked into racism, sexism and other poisonous practices picked up and played routinely without much thought.

7. Working memory sits unused and often remains mute for the cynic, who finds no need for mental equipment that prospers the curious or leaps into action for solution bound minds. Focus on facts that build concrete solutions and working memory tools spring into action to solve complex problems out of bounds to the cynical mind.

8. Brain chemicals refuel retched  moods in cynics, with decreased natural drugs for well being, and increased hormones for negative behavior.  Cynicism blocks serotonin, sometimes referred as molecule of happiness, and stirs up chemicals that accompany disdain.

9. Serotonin sinks lower in mind of the cynic, leaving the brain without resources against anxiety, disquiet, anger, or conflict at work. Each cynical act can lower a brain’s natural serotonin supplies. Increase serotonin through healthy foods, exercise, and many behaviors that spike sincere satisfaction.

10. Brainwaves of cynics rewire daily to rewire a mind for more cynical performances. Organized by a hierarchy, electrical waves control how neurons communicate for better or for worse, and cynical forces can surge a brain’s circuitry for negative outcomes.

Reading this post the cynic will likely see no cause for change, yet cynicism leaves its victims craving attention and creating conflict much like addicts crave drugs or drunks cause oppression. In either case mental tools shut down. In fact, looking back at mistakes, the cynic often chills to bitter regrets, while rarely taking advantage of mental equipment tapped by curious minds who build finer futures. Know any molecular switch that could turn off cynical cravings in your circle?