Did you know that your brain’s equipped to change rapidly and to biologically reshape itself through chemical and electrical activity? 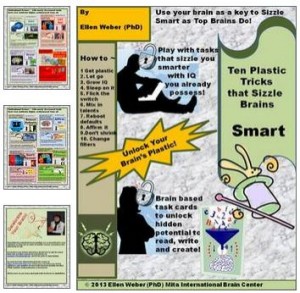 Or that  plasticity will sizzle brain power into any task? This brain trick can speed up learning or jump start successes most  people crave, and yet too often miss out on.  How so?

Here are 10 practical plastic tricks to sizzle your class or team with hidden and unused brain wonders!

Or read on to see what’s behind plastic brains …

It’s important to note that changes and growth are based more on doing acts though, than on isolated facts you hear, read, or memorize. See why faculty meetings and lectures bore people, while activity often adds more meaning that stokes change? Or why Dr. Robyn suggests you should simply take a hike?

Your Chemical and Electrical Circuitry Rocks!

It’s really a matter of neurons and dendrites that spark new synapses for change. Remember, a neuron‘s nothing more than a nerve cell, and your brain holds about 100 billion of these little critters. You can march them much more in your favor – with a few carefully crafted acts. How so? Neurons project extensions called dendrite brain cells – which connect and reconnect daily, based on what you do. Axons, in contrast,  relay information back from the body back to the brain. In a rather complex electrochemical process, neurons communicate with each other in synapses, and that connection creates chemicals called neurotransmitters. Chemicals release at each synapse, and these shape mood, open brains to optimize learning and stoke creative solutions to complex problems. Many mysteries still occur in the quadrillion synapses within a human brain, and yet wonderful benefits await people who act on what recent research suggests.

Hear this interview to help you access more plasticity in your awesome brainpower!

What can you expect from neurons?

Cell processes such as axons and dendrites can often regenerate, regardless of your age or situation. In a process called plasticity that simply refers to a fresh rewiring, you’ll find secrets to change as well as causes of mental stagnation.  Nerve cells create the core of your neuron system, and impact basic changes that can improve your situation, more than most people realize. It’s true that these cannot regenerate if the cell body is destroyed. Yet can can grow, regenerate and change with use, and will rewire nightly as you sleep, based on what you did that day. Dendrites play a critical role in the synapses in your brain which determine the extent to which knowledge is transmitted both chemically and electrically.

Recent discoveries show how the brain uses the outside world to shape and reshape itself physically and mentally. Plasticity, or the newly discovered breakthrough concept of brain “rewiring” is seen to alter a person’s bad habits, add new approaches, or cure a phobia – with benefits described in well told stories. Think of it as creating new neuron pathways to growth or change in a specific area of your day. Then act on the changes you hope to see occur, and watch your brain restructure to facilitate that process. Simply put, whenever you act on what you expect to happen – your brain responds by creating just the right neuron pathways to bring about that new reality. 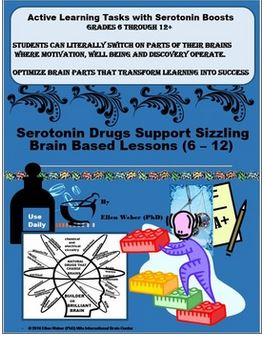 Chemicals in your brain – such as estrogen, progesterone, testosterone, serotonin, cortisol, dopamine and other hormones, play amazing roles to prevent memory loss and solve other problems. They also add to creativity, build openness to change, and regulate moods that impact your confidence to lead in tough times.

Can you see why great seminars fail to reap the growth you’d hoped for, or why discussion groups get lost in the lack of progress you find at work? Change comes to the human brain with action, and passion for further change follows in a step-by-step fashion, where a facilitator guides people to use new ideas to solve real life problems.

Can you see here why we continue to support broken schools for brainy teens? Revolutionary discoveries in dendrite research are changing the way some people lead and learn. These brain cell connectors impact both progress and productivity. Not only can dendrites benefit you at work, simply by what you do, but they’ll also improve your bottom line. For more cash flow – set up a contest for employees to invent ways to save money at work.  For more brand recognition – interview a marketing guru for a dynamic story about brands to grace your firm’s newsletter. It’s that simple – yet it takes action.

You can read more about dendrites… and discover their function for your workplace with Dr. Eric Kandel., who along with, JH Schwartz JH, Jessell TM offers tips in the book Principles of Neural Science. I was also intrigued by Dr. Norman Doidge’s new book, The Brain that Changes Itself. The book shows research and backs ideas with facts in a way that engages a reader to see why new ideas about the brain’s ability to rewire itself – really count.

What will you do differently today to build a more dynamic success in your most challenging situation?